16 January 2023 | Greece requires a pre-departure test travelling from China. All other countries within the EU/EFTA/UK reviewed and no changes since 12 January 2023 update.

12 January 2023 | Information on requirements travelling from China to some EU member states and the UK (England) added to our travel requirements database. See COVID-19 section below.

10 January 2023 | ETOA featured in Skift article emphasing business loss through poor visa processing turnaround. USA reported to be losing up to $12BN as a result.

Tourism depends on high quality visa facilitation and border processes to support economic recovery and encourage demand, particularly from emerging visa-requiring markets. Pre-COVID-19 pandemic, Europe’s share of global international tourism arrivals was declining. Only 17% of the EU’s visitors came from long-haul markets. The value of these visitors has been missed, and the appeal to them of non-European destinations will continue to grow. Meanwhile, maintaining Europe’s cross-border mobility requires political will as well as adequate infrastructure.

ETOA is active on visa policy, from Schengen, UK and Ireland processing, to informing members on cross-border travel requirements both intra-European and from outside Europe. If widespread public health controls are required again, they should be proportionate and co-ordinated such that those travelling with recognised credentials (such as digital vaccination certificates) can travel freely.

ETOA is also campaigning with other industry associations for UK Government to re-instate acceptance of EU ID cards for children under 18 (as well as waiving the need for a UK visa for children of visa-requiring nationality) on EU/EFTA school trips to the UK. Security of new EU ID cards is improving following European Commission regulation in August 2021.

What we are doing

Operating in Europe: what do you need to know

End of 2023, the Entry/Exit System (EES) and in spring/summer 2024 ETIAS currently expected to be introduced to enter the Schengen Area as well as some non-Schengen EU member states. The UK is also planning to introduce the requirement for an Electronic Travel Authorisation (ETA) before 2025. More information below.

As of 16 January 2023, all countries within the EU/EFTA/UK no longer require covid certification to be shown for border entry, except when entering some countries from China.

To check the latest information on COVID-19 border protocols travelling for tourism and in-destination measures (such as wearing a face mask), please see weblinks in our downloadable travel requirements database below.

While permitted entry, the following countries have implemented requirements for persons travelling from China (i.e. pre-departure test certificate, form completion, post arrival testing) following European Council recommendation to EU member states. Information on requirements for each country can be found in our database below as may differ from European Council recommendation.

The Schengen Area remains one of the EU’s great success stories. Borderless travel between 23 EU and 4 non-EU states (EFTA) has transformed the offer of multi-country itineraries enjoyed by long-haul visitors in particular. If there is a serious threat to public policy or internal security (i.e. a pandemic), a Schengen country may exceptionally temporarily reintroduce internal border controls but is required to notify the European Commission (list of current internal border controls).

The introduction of the Entry/Exit System (EES) and European Travel Information and Authorisation Services (ETIAS) expected in 2023 (information below), is part of a long term strategy for the Schengen Area.

The European Commission is committed to further reform, including more digitalisation and has established a common visa policy for visitors to the Schengen Area not exceeding 90 days in a rolling 180 day period.

Summary presentation from our survey in autumn 2022 on visa processing focusing on Asian origin markets can be found here and at the end of this page (also reported in our webinar on 24 November 2022). Initial findings suggest that Schengen Area countries as well as UK and Ireland need to improve services standards to avoid deterring high-spending Asian visitors.

The Schengen evaluation process to assess the readiness of Cyprus to join the Schengen Area is ongoing and a dedicated evaluation is scheduled for 2023.

EES is an automated IT system for registering third country (non-EU/non-EFTA) nationals arriving as visitors into the Schengen Area or Bulgaria and Romania for short stays (max 90 in 180 days), both visa-exempt and visa-requiring.

Applicable to: third country (non-EU/non-EFTA) nationals arriving as visitors for short stays (max 90 in 180 days), both visa-exempt and visa-requiring, of all ages although collection of biometric data varies by age. See question 1 in FAQs for exemptions.

System: EES will replace manual stamping in a passport and enable use of e-gates. Collection of biometric data will be required:

The process to collect the biometric data may vary by country (i.e. at border or remotely). Further information is to be announced including on National Facilitation Programmes for frequent visitors.

Additional information: When EES starts, time spent in Bulgaria and Romania will count towards the time limit in the Schengen Area (i.e. 90 days in rolling 180 day period). See question 2 in FAQs.

ETIAS is a pre-clearance permit to be required by nationals of third countries (non-EU/non-EFTA) arriving as visitors into the Schengen Area or Bulgaria, Cyprus and Romania, who do not require a Schengen visa (Annex II). For example, British (UK), Japan, USA.

Start date: planned to be operational from November 2023, but expected to be delayed until spring/summer 2024 (due to EES delay).

Cost: €7 per person aged 18-70 years old except family members of EU/EFTA citizens where applicable (under 18 and over 70 still need to apply even though free)

Validity: 3 years or until expiration of travel document i.e. passport, whichever is sooner. Multiple entries will be permitted during period of validity. A standard ETIAS travel authorisation allows travel to all countries that have implemented ETIAS.

Background information: Unlike the USA equivalent (ESTA), the revenue will not contribute to tourism promotion. Following strong representation from industry, the fee is set at a level to cover costs including development of land border infrastructure as well as the system itself. ETOA and other associations took the view that seeking profit would penalise those who had chosen to visit Europe, and that promotion should be funded in other ways. Some confusion about scope and operation has arisen due to the proliferation of unofficial websites with URLs containing either Schengen or ETIAS.

Official website (including how to apply when launched): European Commission ETIAS webpage

Ireland and the UK (England, Northern Ireland, Scotland and Wales) have a Common Travel Area (CTA) whose operation is unaffected by the UK’s departure from the EU allowing free movement for British and Irish citizens within the CTA. The CTA includes the Channel Islands and Isle of Man.

For non-British/non-Irish citizens the maximum length of time permitted to visit differs between Ireland (90 days) and the UK (6 months).

Taking into account the different time period, there is common visa policy between Ireland and the UK for certain nationalities such as the British Irish visa scheme for Chinese and Indian nationals. This scheme allows travel in Ireland and the UK for Chinese and Indian nationals on a single visa (either issued by Ireland or UK, usually the country of first arrival). Ireland also has a short-stay visa waiver programme that exempts nationals of certain countries who have a UK visa from needing an Irish visa when in Ireland (this programme is not reciprocated by UK Government).

Summary presentation from our survey in autumn 2022 on visa processing focusing on Asian origin markets can be found here and at the end of this page (also reported in our webinar on 24 November 2022). Initial findings suggest that Schengen Area countries as well as UK and Ireland need to improve services standards to avoid deterring high-spending Asian visitors.

When travelling between Ireland and Northern Ireland, there are no immigration controls on the land border, but the traveller needs to check if a Irish/UK visa is required for their nationality in either country. For nationalities who do not require a UK visa, a pre-clearance permit is planned to be introduced before 2025 and to be required in Northern Ireland (see below: UK Electronic Travel Authorisation scheme).

ETA is a pre-clearance permit to be required by non-British/non-Irish nationals of countries arriving as visitors into the UK (including from Ireland), who do not require a UK visa (country not on this list). For example, countries within EU/EFTA (excluding Ireland), Japan, USA.

Start date: planned to be fully operational before 2025, the introduction date is still to be announced. UK Government Border Control Strategy Statement in July 2022 (paragraph 58) indicated the rollout would begin approximately March-July 2023 for nationalities of Middle East countries who currently require an electronic visa waiver and from approximately June 2023 for other UK visa-exempt nationals. As of January 2023, these start dates have not been confirmed.

Cost: to be confirmed, including any age-related applicability (the cost is expected to be within the range of US ESTA and EU ETIAS i.e. approximately £6-£20 per person. ETIAS price was set to cover costs, not generate revenue. ESTA was intended to generate revenue for promotional purposes. It remains to be seen what approach the UK will take.)

Validity: to be confirmed (our understanding is that it will last more than one year or until expiration of travel document, whichever is sooner). Multiple entries will be permitted during period of validity.

Official website (including how to apply): not yet published 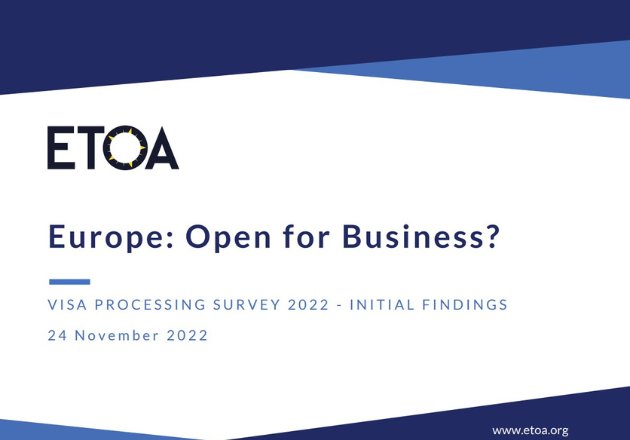 Take a look at the initial findings from our Visa processing survey. The full report and recommendations are due in 2023. 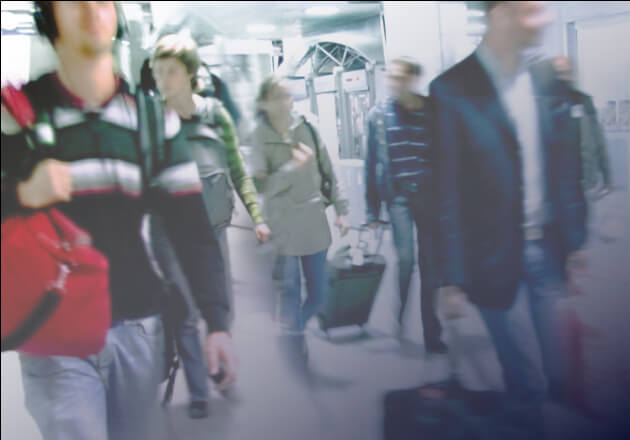 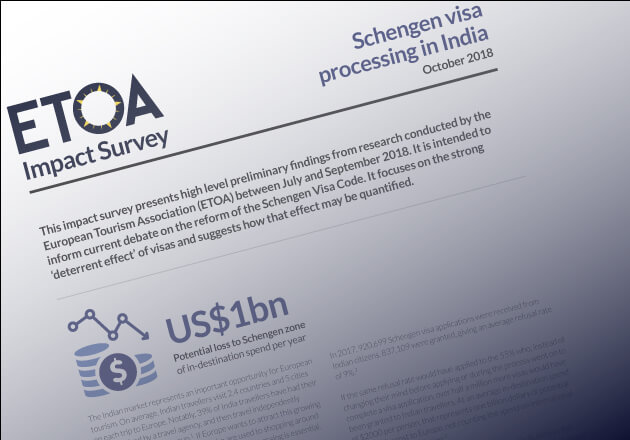 This impact survey presents high level preliminary findings from research conducted by ETOA between July and September 2018. It is intended to inform current debate on the reform of the Schengen Visa Code.

Disclaimer: While best efforts have been made to verify the accuracy of the information, the information displayed on this page should be used as guidance only.